Last week, May and I attended the Small Boarding Schools Association (SBSA) conference.  There was a panel of speakers, all in college admissions, from NC schools that included High Point University, Salem College, Wake Forest University, and UNC Chapel Hill.  WOW!  What a diversity of colleges in terms of size, prestige, private vs. public, elite vs. not.  They all spoke about the very hard task they have of deciding whom to send acceptance letters to and  whom to reject.  None of these schools had “magic” formula or hard and fast rules they could point to. They don’t know if each and every student they choose to accept will ultimately succeed at their institutions of higher learning and who would not.

As we read this mother’s feelings as she shares vicariously with her child, reading a rejection letter, she feels the pain of rejection also.  The truth is that there is no “Perfect U” and that we all, at one time or another in our lives, will experience rejection!  That is why it is so important to apply to a list of colleges that include some schools that are “safety” and some that are “reach” schools.  Isn’t all of life about a balance between safety and reach?  Malcolm Gladwell offers a controversial couple of chapters in his new book,  David and Goliath, making a case to us that a less elite school gives students a chance to shine in a way that a more competitive “perfect” school would not allow.  Maybe the best conclusion is that the college search process is a road with twists and turns, just like life, and our best strategy is to do our best, hedge our bets, and enjoy the process, learning to adapt and be successful wherever we are planted!

College Admissions Season: When the Answer Is No 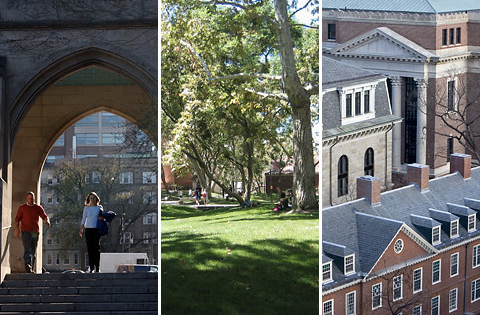 The campuses of, from left, Boston University, the University of Southern California and Harvard.

The envelope came on a Friday in March — the last day of the last week of a college acceptance season that had been dragging on since early admissions began in October.

It figured that  my child picked as his top school one of the few universities to still send out acceptances — and rejections — via snail mail. From any other institution, an ordinary No. 9 business envelope would look like an automatic “no.” But I’d done my homework, so I knew Perfect U.’s acceptance letters are a mere two sheets of paper. Rejections are one.

This envelope was so flat, it seemed to contain nothing at all, like some last, cruel joke from an admissions department that had been indifferent from the start. I texted my firstborn, who was stuck on a bus in traffic, coming home from a school trip. “It’s here. Not gonna lie, looks thin. Should I open?”

It takes 18 months, this business of finding a place in the world for your child. Some people tell you, hands on hips, that the college application process should be “entirely student-driven.”

As if you would let a 17-year-old make the biggest decision of his life (so far) unaided. As if a high school junior has even an hour’s worth of extra time between SATs and APs and sports and school clubs and volunteering and demonstrating interest and taking leadership positions and the stuff of regular teenage life — drivers’ licenses and prom dates and after-school jobs.

It’s actually a lot of fun, in the beginning, to leaf through the piles of college catalogs and surf the pretty websites on your child’s behalf. So many schools, so many majors, so many different lives they might wind up living.

On paper, my son was in good shape. He had a healthy list of target schools with lots of  “likelies” and only a few “reaches.” But we made a fatal mistake when we began visiting colleges. We started from the top. Which caused him to do that thing they tell you not to do: fall in love with just one school.

Everyone’s Perfect U. is different — be it a community college, state school, liberal arts college or Ivy League. And while my son’s pick did indeed boast impressive academics, an appealingly diverse student body and a postcard-ready cobblestoned campus, he fell for it because it seemed like the best place for him specifically: nationally known for his chosen major, in the city where it made the most sense for him to live. It was a reach, but still within the statistical realm of possibility. Or so we told ourselves.

I made frequent, halfhearted attempts to keep our collective hopes in check, but deep down, I kept thinking, it could happen. Sure, the school had an intimidatingly low 16 percent acceptance rate, but somebody had to get in. Why not my child? His other schools seemed to like him just fine. He was beginning to pile up a few acceptances, including a nice package from Pretty Good U., which was in the same city as Perfect U and offered the same majors and internships. It was a great school; it just wasn’t Perfect.

Whatever else, I always imagined, after everything that we’d been through, that we’d be together as a family when the envelope came. Instead, ordinary life intervened, as it does. I had to leave  (for a funeral, of all things) before my son got home. His father was at work, his brother out doing what middle schoolers do, untethered by college cares. And so it happened that he was alone when he read his letter, his one-page letter.

I pulled off the highway when I saw who was calling. “Hi, honey.”

“Full-on rejected. That’s me.” His voice wavered, but only slightly.

The disappointment of a college rejection is brief, but it’s deep. I leaned against the cool of the driver’s side window and let the tears flow, just for a minute.

The pundits want to put labels on us — helicopter parent, tiger mom, elitist — for caring where our kids go to college. But for most parents, truly it’s not about chasing a brand-name university, it’s about finding the next right place for our children as we let them go.

In all honesty, at Perfect U. my son would probably have had to spend almost all his time in the library. At Pretty Good U., where he is finishing up his sophomore year, he likes his classes and gets good grades and still has time for a paying job, school clubs, an internship, his roommates and a girlfriend.

If your household is waiting this week for an envelope, or an email, or a phone call, know that your kid is likely going to thrive wherever he or she ends up. But if the answer is no, know also that it’s okay to cry a little first.

Tracy Mayor is a parenting reporter and personal essayist who lives north of Boston. She tweets tech topics @CW_Tracy and lifestyle and culture observations @mommyprayers.